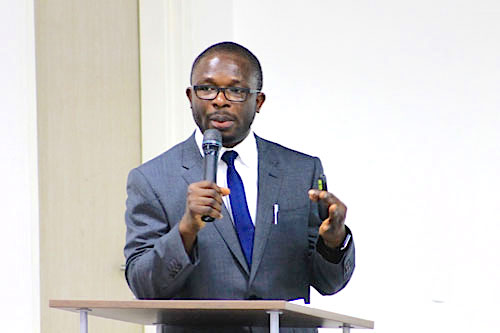 Professor Jacob Udo-Udo Jacob of the School of Arts & Science has advocated a more communitarian role for journalists in Nigeria to help counter violent extremism in the country.

Professor Jacob was speaking recently in Abuja, on ‘New Perspectives in War and Peace Reporting’ at a Media Roundtable on Countering Violent Extremism (CVE) organised by the Office of the National Security Adviser (ONSA) in partnership with the EU Technical Assistance on Nigeria’s evolving Security Challenges (EUTANS).

He said Journalists should re-assess their role set in the society and see themselves as engaged members of the community, rather than as detached observers.

Prof Jacob said Peace Journalism can create mechanisms that proactively report peace efforts over reactive coverage of violent incidents. “Across the Northeast”, he said, “there are various community-based peace support organisations such as the Adamawa Peace Initiative in Adamawa State, working to build peace and support IDPs. By highlighting the intervention efforts of such groups in their news reports, the media can open up a communal sphere for engagement with peace initiatives. Peace Journalism as a normative media regime, therefore recommends the adoption of a critical-transactional framework that reinforces peace as a key strand in the conflict narrative”.

“Former British Prime Minister Margaret Thatcher once said that the media provide the oxygen of publicity upon which terror organisations depend, this may sound alarmist, but the fact remains that terror organisations are increasingly media savvy, drawing on both mainstream and new media to propagate the ideologies that inspire their operations” Prof Jacob said.

Professor Jacob who is Chair of the Communications and Multimedia Design Program at AUN, said the media must not settle merely for the role of enlightening or informing the public, but should strive for social justice and peace. Peace Journalism, he said, is derived from a communitarian role set for the press which requires journalists to tell stories of peace and justice.

He said although traditional liberal theorists have always maintained that the key function of the media in a pluralistic democracy is to position itself as a check on the state, Journalists should demand more of themselves than a mere watchdog role or even mere objective reporting of news. “Under the ethical notion that peace, truth and justice is the key obligation of the press, the Peace Journalist seeks to report stories that create opportunities for society to consider and value non-violent responses to conflict.” He said.

“Under this media regime”, he added, “the press has the cardinal obligation to be involved as engaged members of the community and to use their resources, privileges and expertise to stimulate dialogues that can lead to peaceful co-existence”.

The Media Roundtable was attended by the head of the Strategic Communications and Messaging Unit in the Office of the National Security Adviser, Zakari Mijinyawa, security experts, editors and bureaux chiefs of international news media organisations including AFP, AP, BBC, Guardian newspaper, Leadership newspaper among others, top government functionaries from the Information Ministry, members of the diplomatic community and representatives of EUTANS.

Professor Jacob Udo-Udo Jacob who obtained his PhD in Strategic Communications from the University of Leeds in the United Kingdom has researched and published extensively on Information Intervention in violently divided societies. He has facilitated Peace Journalism workshops for journalists covering the Boko Haram insurgency in North-East Nigeria. Dr. Jacob who is a member of the UK’s Conflict Research Society is presently Interim Associate Dean in the School of Arts and Science. His research interest is located at the intersection between communications and political change in contemporary society. His works have been published in international peer-reviewed journals including War and Society, Small Wars Journal, Stability Journal of International Security and Development, among others.